STAR awards acknowledge and give a permanent and lifetime championship status to our breeding programmes greatest horses and producers. Your horse will have their STAR status added to his/her unique reference page in our studbook. His/her name will be suffixed with the abbreviation (STAR) which will be reflected on all future generation pedigrees. Identifying him as a STAR horse to those interested in studying pedigrees and breeding from superior horses.

Earning Points
Open to all Horses passported with AMHCGB in Studbook A, B or C. STAR points are earned at all MHCGB affiliated shows.
Points credited to each animal take into consideration not only the actual placing in a class, but the number of entries in the class. The points are cumulative and stay with the horse throughout his/her entire life.
To achieve STAR status horses must score 70 points in Halter or Performance together with five Championshipwins (one must be one as a two year old or older), or five performance Championships. A horse could achieve Star recognition in both Halter and Performance if requirements are met.
Points will not be awarded for Amateur, Colour, costume, handler or turnout related classes.

STAR Recipients for the year will be posted by the end of November.
A mare can also be designated as a STAR Dam when she has produced two STAR offspring and a stallion becomes a STAR Sire when he has six STAR offspring. 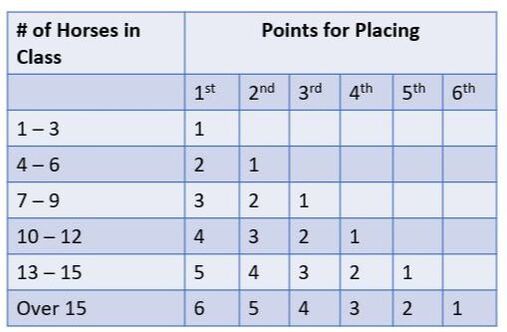 IMPORTANT
​In order to be eligible you must obtain a points card which must be signed/completed in the ring by the judge stating placing and number of competitors forward for class. Any unsigned placings/competitor numbers will not be counted.

Cards cost £5 and can be obtained by sending a SAE and cheque / proof of payment to the club secretary, Janice Goudie - address details on the contact us page; or alternatively purchased at a MHCGB show.

Points cards must be returned to the passport Head office by 20th September each year. Any shows after this will be carried forward to the following year.

If you sell your horse please pass on his/her points card.